When Chloe comes home early from a weekend with her dad and step family, she finds her house empty, but covered in blood. Where is her mother’s body and who would want her dead?

This book deals with the usual issues of good crime fiction: greed, jealously and revenge and lots and lots of blood. I haven’t read any of the other Maeve Kerrigan books by the author but I found her sleuth to be well written. There were references to previous relationships within and without the police force, obviously covered in previous books, but this didn’t spoil my enjoyment of this well paced mystery.

I must admit that I guessed what had happened fairly early on, but I soon realised that the plot point I thought obvious was only a part of the picture and there were more than adequate twists and turns to keep me guessing, right to the end.

This is a good book and I would certainly read more by Jane Casey. 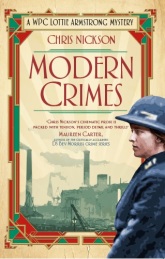 I’m a fan of Chris Nickson’s other crime novels, especially the Richard Nottingham series, so I was very interested to read his latest book, set in 1924. I was especially excited to read an historical crime novel with a female protagonist, WPC Lottie Armstrong.

Lottie, and her partner Cathy, walk the beat in Leeds. However, as WPCs their duties are very different to those dished out to their male counterparts. They deal with women and children, prostitutes, illegal abortions, a tiny subsection of the duties expected of a regular police constable. But thanks to a CID officer who values Lottie’s people skills and ‘pluck’, she soon finds herself heavily involved in a case that includes murder, embezzlement and ‘deviants’, the term then used for homosexuals and transgender people.

Nickson’s plotting skills are as flawless as usual and he builds up the tension nicely, making the reader keen to discover not only the who- but also the why-dunnit.  The main characters are well drawn and my only disappointment with the book is that the secondary characters, like Lottie’s husband, seem a little underdeveloped. But this is a minor quibble in an otherwise excellent book.

We’ve all heard the old adage that we ‘shouldn’t judge a book by its cover’ and in the case of If I Never See You Again by Irish writer Niamh O’Connor, this couldn’t be more true.

The cover doesn’t do justice to the intelligence andplotting of the novel. It looks amateurish and doesn’t reflect the book’s content at all. If it wasn’t for me getting the book for free as part of the Transworld Crime Caper project, I’d never have picked it up.

And that would have been a real shame.

Jo Birmingham is a recently promoted detective in Dublin, a single mother – her husband (and boss) recently left her for his secretary – she has to fight hard to be taken seriously in her male-dominated workplace. I really liked this character. I empathised with her situation and was rooting for her throughout the novel.

I found the plot a little confusing. Granted, I read this book while going through a fibro flare-up and may not have been as on the button as I’d like to be, but I never quite understood how Jo made the connection between the manner of the victims’ death and the religious element of the story. I felt this could have been exploited more. I also thought that when he was identified, the religious connection to the killer was a little tenuous. Personally, I’d have liked the book to be a little darker in tone – the religious nutter theme lent itself to this and it would have made the story a bit stronger.

My last niggle with the book is the title. I have no idea what the relevance of If I Never See You Again has to the story. Ms. O’Connor might as well have called it ‘Alan’. Or perhaps I’m just being dense about it.

The big question is would I read another of Niamh O’Connor’s books? I have to say, yes. As I said before, I cared about what happened to Jo Birmingham and would gladly spend a few more hours in her company. All in all, a recommended read to crime fiction fans.

“A human body starts to decompose four minutes after death.”

So starts The Chemistry Of Death by Simon Beckett and this macabre beginning sets the tone for the horror that will unfold in the village of Manham as the bodies of two apparently unrelated woman are found.

Beckett very skilfully moves from this cold, scientific description of death to the effects the discovery of the body has on the community; from the two young brothers who discover the remains to reminders of a past our sleuth, Doctor David Hunter, is trying to forget.

The author throws up many red herrings in the narrative and I am happy to say that I was wrong about who I thought the killer was. I like to be surprised and didn’t feel cheated when the killer was revealed. Mr. Beckett created characters I cared for and I was so gripped by the story that I finished the book over two evenings. I’d award this book 4*.

So, why am I not giving the book a five star review?

There were too many ‘semaphores’ for my liking, where the author left the linear narrative to figuratively tap the side of his nose in a knowing gesture, hinting that he knew what was going to happen. For example, “In the coming days I would look back on this afternoon as one last glimmer of blue sky before the storm.” And “I didn’t know it then, but that was about to be proved in the way I least expected.” This jarred given that the book was written, on the whole, in the first person.

Would I read Written In Bone, the next book in the series? Certainly. But I’d hope there would be fewer distractions from the narrative in this one.

I am a big Stuart MacBride fan. His Logan McRae crime series never fails to delight me and the man himself is far lovelier than his gory prose might lead you to believe – he has been a judge in a children’s writing competition my writing group ran. Dark Blood didn’t disappoint.

The ‘tag’ for this, the sixth in the Granite City books, says that “Everyone deserves a second chance” but by the end of the book, MacBride makes it clear that this isn’t the case. Not by a long chalk.

Richard Knox, a particularly obnoxious man relocated to Aberdeen on release from a prison sentence for raping old men. Yup. You heard right. MacBride is never one to shy away from the exceptionally nastier side of life. Soon a mixture of Geordie, Aberdeen and Edinburgh gangsters are making McRae’s life its usual living hell in a plot with more twists than a twisty game of twister.

I do have a couple of gripes.

The relationship between Logan McRae and his girlfriend, goth crime scene technician Samantha, has never quite rung true for me. I know they bonded over scars – McRae earned the nickname Lazarus by surviving a particularly vicious knife attack several years before – but is that enough to keep a young, vibrant girl like her with a middle-aged, over-worked grouch? I can’t remember the last time Laz laughed.

In this book it seems McRae has developed an alcohol problem that begins to interfere with his work. I have conflicting opinions about this. Firstly, why did it take so long? The guy has been beaten, abused, knifed, eaten human flesh (not on purpose), lost his PC girlfriend who had her own ideas about what constituted justice …. A lesser man would have turned to the booze long before, if not something stronger. Personally, it might have been more interesting if Logan had an addiction to prescription meds. God knows he has had many reasons to take strong painkillers as a result of his “adventures” and the old cliché of the alcoholic cop could have been avoided.

But I really am nit-picking.

The usual suspects are all back and D.I. Steel is her usual potty-mouthed, non-pc, chain-smoking, hilarious self, this time married to her partner Susan who just happens to be carrying Logan’s child. It’s complicated.

I’m looking forward to reading MacBride’s next instalment in the Logan McRae series, Shatter The Bones. I’d like to wait for the paperback so I can line them up on my bookshelf, but the kindle version might win the day.