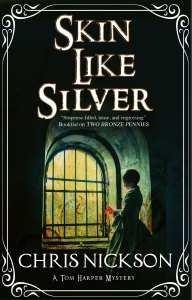 Like Chris Nickson’s other Tom Harper novels, “Skin Like Silver” is set in Victorian Leeds. The book opens in October 1891 with the discovery of a decomposing body of a baby in a box at the post office. That same night, Soapy Joe’s soap factory catches fire and a significant part of Leeds station is destroyed. In the aftermath a body is discovered in the rubble, covered in the molten steel from the station girders. When they discover that she did not perish in the fire, but was stabbed, multiple times, Inspector Tom Harper sets out to discover who she was and why someone would want to kill her.

The woman is identified as Catherine Carr, the estranged wife – and ex-servant – of a wealthy man. She is involved with the suffrage movement but outside of her work and suffrage meetings, lives an unremarkable life. Who could be responsible for her death? And why has her brother escaped from the asylum after hearing of her passing?

Nickson’s attention to historical detail is as accurate as ever. Skin Like Silver is populated with real people and characters so well detailed you find them totally believable.

Just as CJ Sansom’s Shardlake has a hump, Tom Harper has his own disability in the form of progressive deafness. So many modern detectives have complicated families and alcoholism as their burden and it is a pleasant change to read about a man whose family life is strong.

I could almost experience the metallic tang of the fog that played such a prominent part of the story and loved the author’s attention to detail.

Skin Like Silver is up to the same high standard of Chris Nickson’s other books and if you like historical crime, you’ll love this.